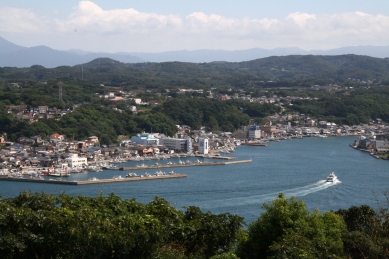 This tiny port town is actually a part of Karatsu City. It sits 30-40 minutes outside of Karatsu proper and is a beautiful drive through the mountains to reach the only main road running along the coast.

Every September the tiny town is flooded with tourists from around Saga to sample fresh seafood and grill it themselves, watch singers and comedy routines, and pick up an order of fresh squid. 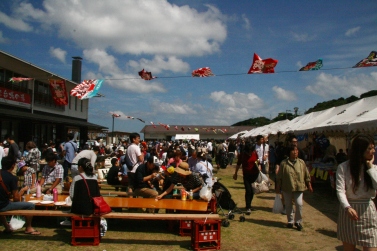 We arrived around 10 am just as everything was starting. We were smart to park on the other side of town at a pier and take a free shuttle to the festival.

The Yobuko ALT later told me that traffic was backed up the entire day which made it near impossible to drive through town. 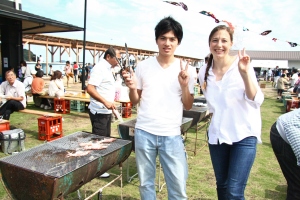 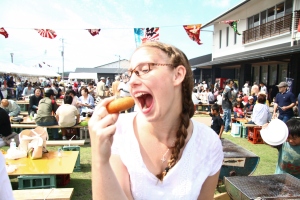 Megan and I were invited by our boss/friend who has acted like a second mother since my arrival. Her and her son were kind enough to treat us to wonderful food and cook it for us as well (left picture). We ate fresh squid, shumai, sushi, and fish donuts! (right picture) 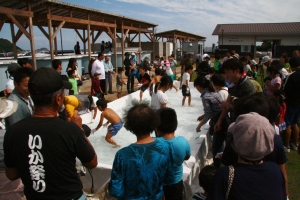 Children got the chance to catch fish with with their bare hands! The contest was complete chaos as children shrieked and dashed about the pool to catch as many fish in 3 minutes. Each fish was brought to their parents holding plastic bags ready to cart the days catch home. One girl was a seasoned veteran catching over 5 large Saba and breaking through 2 plastic bags. 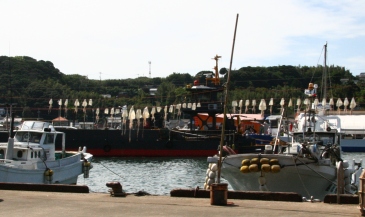 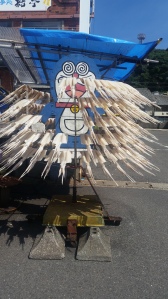 Driving through town you can fresh squid drying in the sun in front of the fishing boats and flying around on the a squid “merry-go-round”. 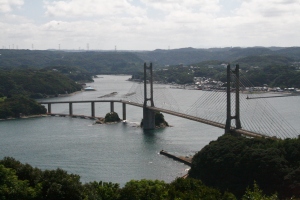 In the afternoon we drove to a neighboring Tashima island to visit the Tajima Shinto Shrine. 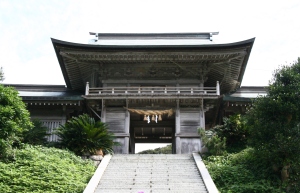 The shrine sits atop a hill on the coast with stairs leading from the water up to entrance. After washing our hands in purified water we made the trek up the stairs. 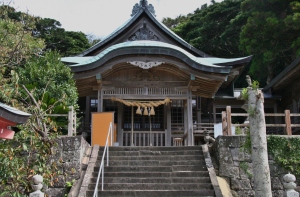 In the main area there were two shrines. The main shrine is shown above and below is a small but more colorful shrine that sat off to the left before ascending the stairs. We gave an offering of 10 yen (roughly 10 cents) at each shrine to pay our support and respect. 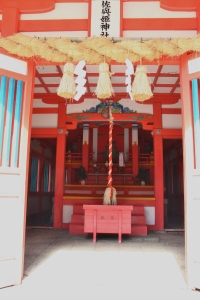 It was the perfect end to a great day. I wish my car could make the drive because the drive is beautiful and I would love to explore more places like Yobuko and Tashima Island. Next year I plan to try out the fresh sea snail at the festival!