I can’t believe May is already over. And I can’t believe there is only one month left until the JLPT Test in July. I’m not sure if I’m ready. My Kanji recognition has gotten better and my reading is faster but is it enough to pass the JLPT N4 test? June will be spent Studying my butt off so I don’t fail again.

During intense studying, I believe it is important to have an element of fun or find a fun way to study. For me, that is reading. I love to read and I love all genres (except maybe horror, but maybe I just haven’t found the right book). Japanese stories are no exception. I love reading manga and I can hope that one day I am able to read popular light novels and the classics.

So, for the month of June, I have picked out four books to read in preparation for my upcoming test: Baba Yaga, Majo no Takkyuubin, Koe no Katachi, and Barefoot Gen. 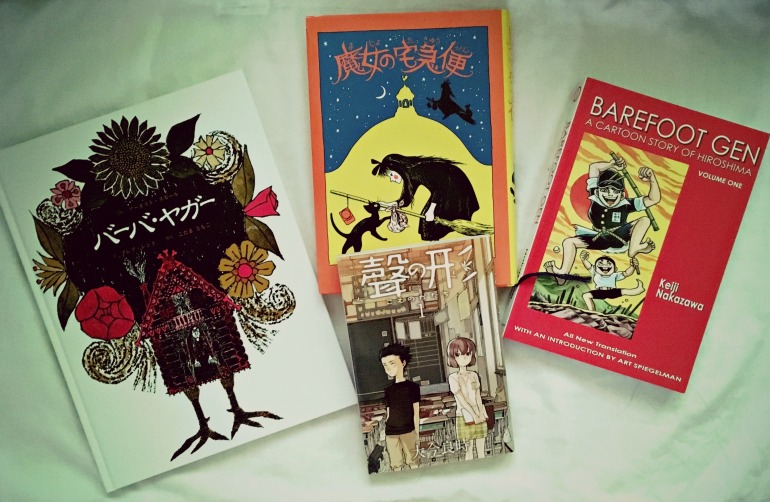 The first book I have chosen is Baba Yaga which will be an interesting read because it’s a Slavic folktale translated into Japanese. I bought the book last year in Nagasaki at the Inori no Oka Picture Book Museum. If you are ever in Nagasaki I recommend stopping by. The first floor in a children’s bookstore and the upper floors are the picture book museum.

Baba Yaga, as I said before, is a Slavic folktale. She is usually depicted as a ferocious old woman who flys around in a stone mortar wielding a pestle and lives in the forest in a cabin standing on a single chicken leg. She has played many roles as a villain or ambiguous helper, but whatever her role I look forward to reading this picture book.

The second book is Majo no Takkyuubin 魔女の宅急便  (lit. Witch’s Home Delivery Service) or better known as Kiki’s Delivery Service in the West, made famous by Studio Ghibli’s movie adaption. I didn’t know the movie was based on a book of the same name. It blew my mind when I stumbled across the books (that’s right, it’s a series!) when I lived in Sapporo. At the time, it was impossible for my to read this children’s book. But now I’m ready to tackle it again. It’s still an ambitious read but I like the challenge.

The first book is like the movie. It begins with Kiki leaving home on her 13th birthday to live on her own, find her calling, and become a real witch. I can’t wait to read about all of Kiki’s adventures.

My third choice is Koe no Katachi, literally means the voice’s shape or the shape of the voice. Recently it was made into a movie and I want to read it (and the series) before I watch it. I really don’t like the English title, Silent Voice. Let me explain.

The story is about the relationship between a young boy and a young girl. They meet in elementary school when the girl arrives as a new student. Except, she introduces herself by writing in a notebook. She is deaf and her classmates cannot sign. The boy bullies her throughout elementary school because she is different. However, the tables turn when they have parted ways and he finds himself the outcast in high school. And it is there they meet again.

“Silent Voice” isn’t a bad title. It’s just not that original. It does its job and gets the message across. I just think the Japanese title conveys a deeper abstract message about what the story is about. From just looking at the cover you can’t tell the girl is deaf but you know the story is about the relationship and communication between the two. The English title sort of throws it in your face. Silent Voice = someone probably doesn’t talk/has communication issues. I’m being nit-picky. I know that. It won’t stop me from being excited about reading the manga or watching the movie. I’ll just be slightly unimpressed with the English title.

Last but by no means least is Barefoot Gen. It’s the only book in English but I kept the Japanese theme going as it is the true experiences of author Keiji Nakazawa surviving the atomic bombing of Hiroshima. It’s a hard and important read.

I was lucky enough to have introduced to this story during high school. It was an assigned reading for one of my English classes. It left a real impact on me, but I never got the chance to read the series as we only read book 1. This year, during Golden Week, I visited the Hiroshima Atomic Bomb Museum and bought this book not only to read but to keep in my future classroom in hope that it will move my students like it moved me.